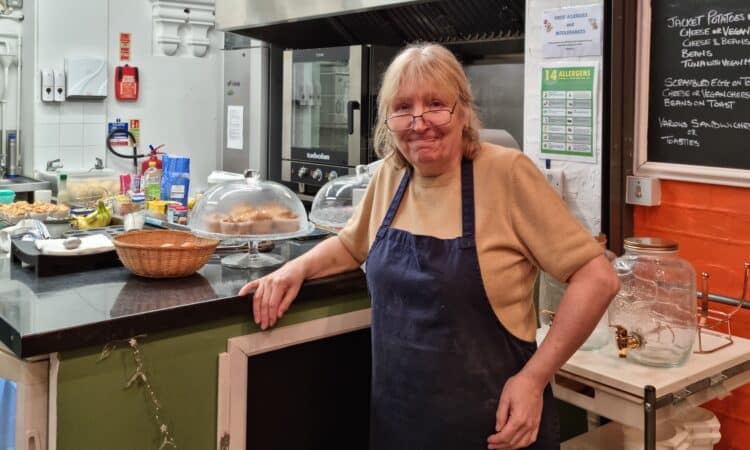 Goodbye to Christine in the cafe

This week we’ve reached a big milestone in the life of St Paul’s church. This is the week that Christine Fryer, our cafe supervisor, finally hangs up her oven gloves and retires. Her last day is Friday 16 December.

We’ve known about this for a while, but it still feels like a big deal. Chris has been with us since 6 October 2009 (she remembers the exact date and occasion) and has become an integral part of the community at St Paul’s in the past 13 years.

Mind you, when she started, she couldn’t have imagined how it would work out. She initially came in as an assistant in the cafe kitchen for 4 hours a day. But 9 months later, when the chef Nick left, she upped her hours and took charge. It was quite the career change. “I never thought I’d be a cook and baker for a living,” she said. “I always thought I’d be an assistant, not running the place”. It was quite a change from the office jobs she had done in the past, going in a short space of time from working for a Japanese finance company in Aldgate to running the St Paul’s cafe. But we’re glad she made that move.

Chris has done a lot in the years since. As well as running the cafe every weekday, and managing the volunteers, she’s baked for outside customers and catered for many events at the church, including the annual volunteers’ Christmas dinners, an eco conference and the recent Jubilee party.

She’s had many highlights. The cakes are an obvious one. “People really like the cakes. The most popular one is lemon drizzle”. But the main highlights revolve around the people she meets in the cafe every day. “It’s been great to have customers who come back to visit, even after they move away” she says. “And I’ve loved seeing the kids of customers grow up over the years”. There’s the caring aspect of the job too. Because St Paul’s is a place that welcomes the whole community, she’s been involved in helping vulnerable people who come into the cafe for a safe, friendly space. “Nobody told me about that!” she recalls.

So it’s not surprising that the things she’ll miss most about the job are the people and the community around the cafe. “I always got on with the customers” she said, “but I’m not far away. I’ll likely see them again”.

So what does retirement hold for Chris? “People told me I’ll get bored” she laughs “but I won’t get bored. I have a lot of things lined up”. These things include learning ballroom dancing, particularly the waltz and foxtrot. And going swimming more. She’ll also be spending more time with her cousin, who recently retired, and seeing her aunt more. There’s one thing she won’t be doing so much though: “baking! I won’t be doing any of that for a while!”.

Happy retirement Chis, you’ll be missed. And you go with the love and prayers of the people of St Paul’s. 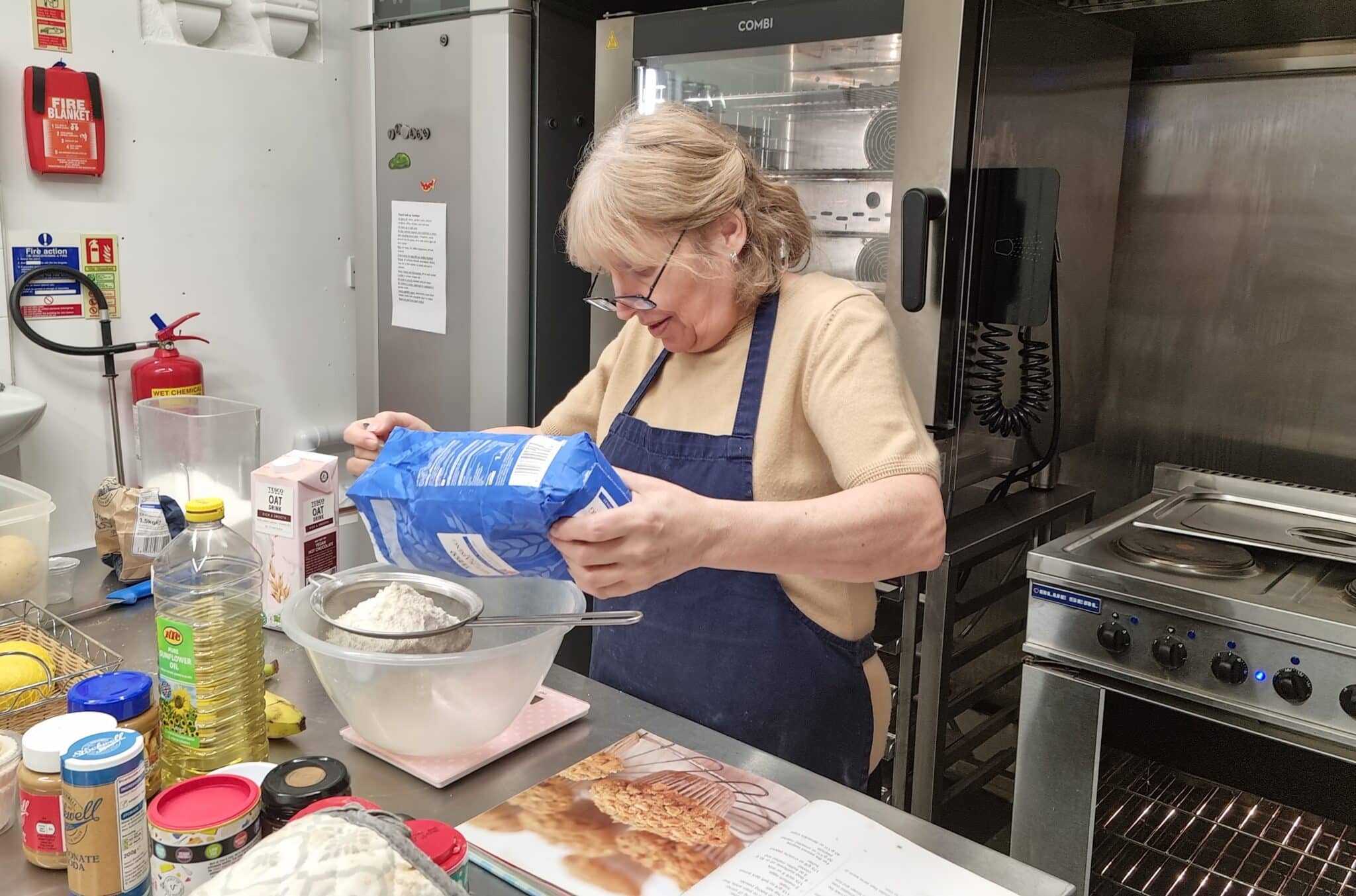 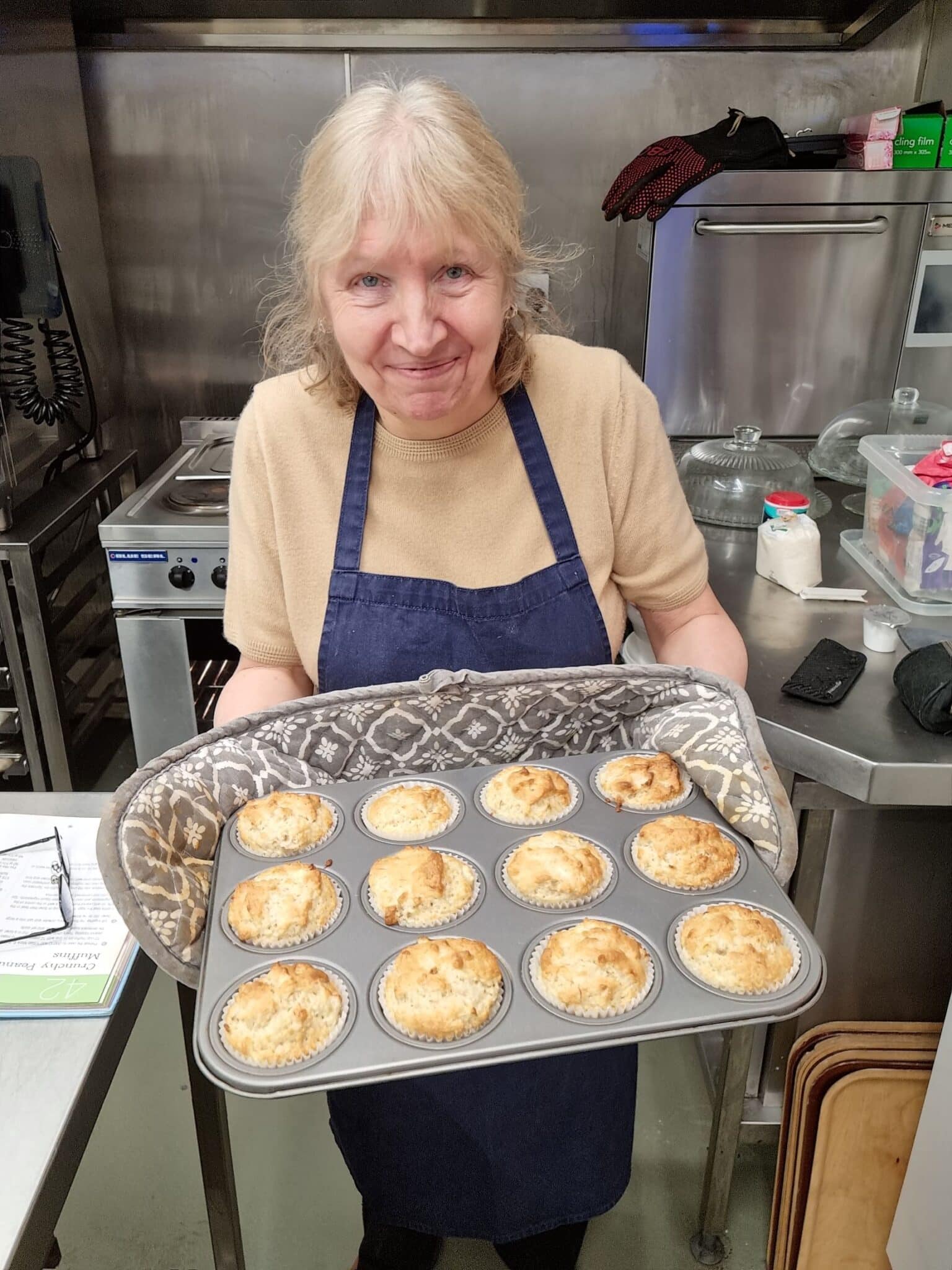 Banana muffins, fresh out the oven. 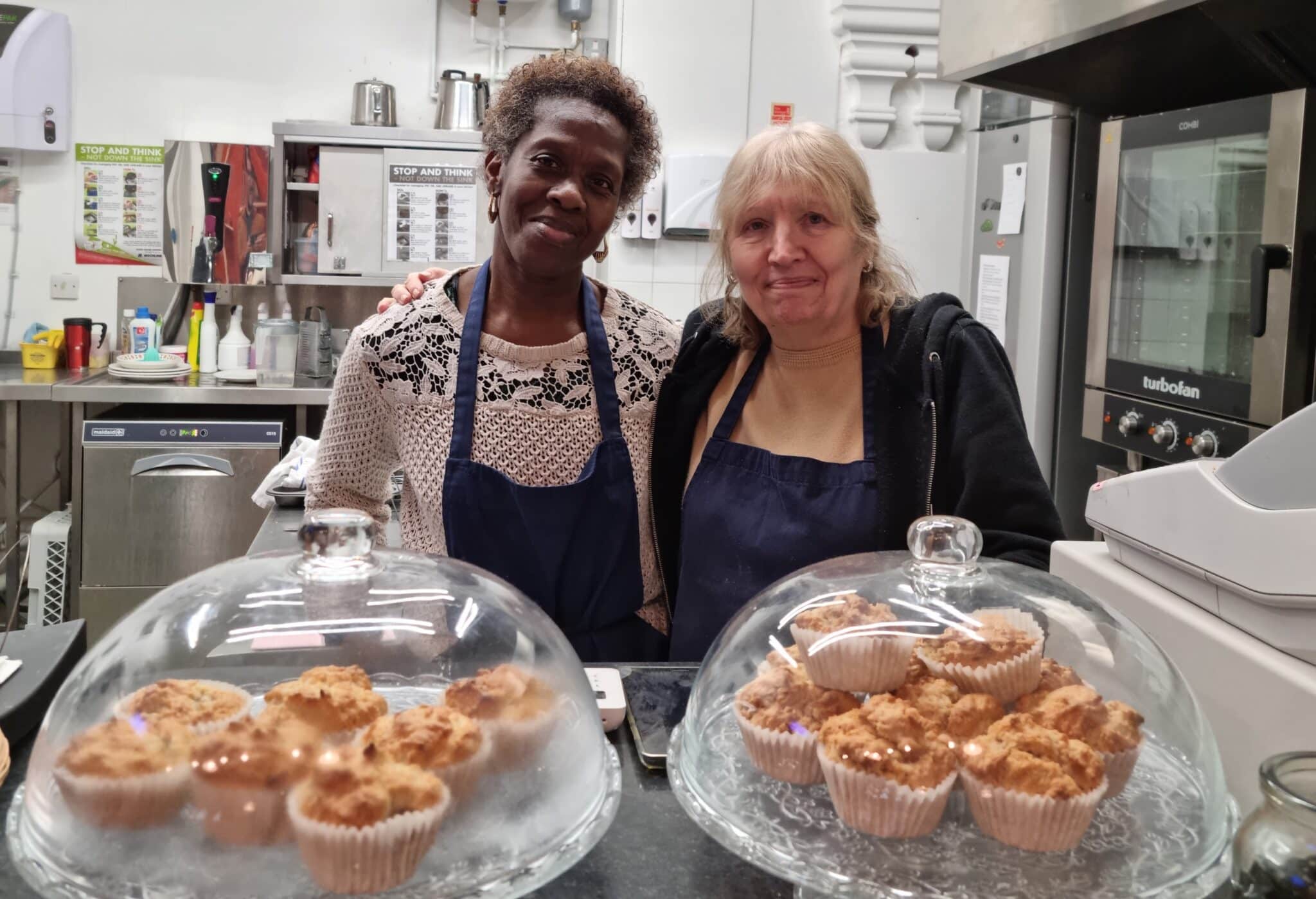 Chris and Rose in the café. Rose is one of our volunteers, who’s been helping here for even longer than Chris (15 years)! They’ve both become good friends over the years, and often do things together outside work. 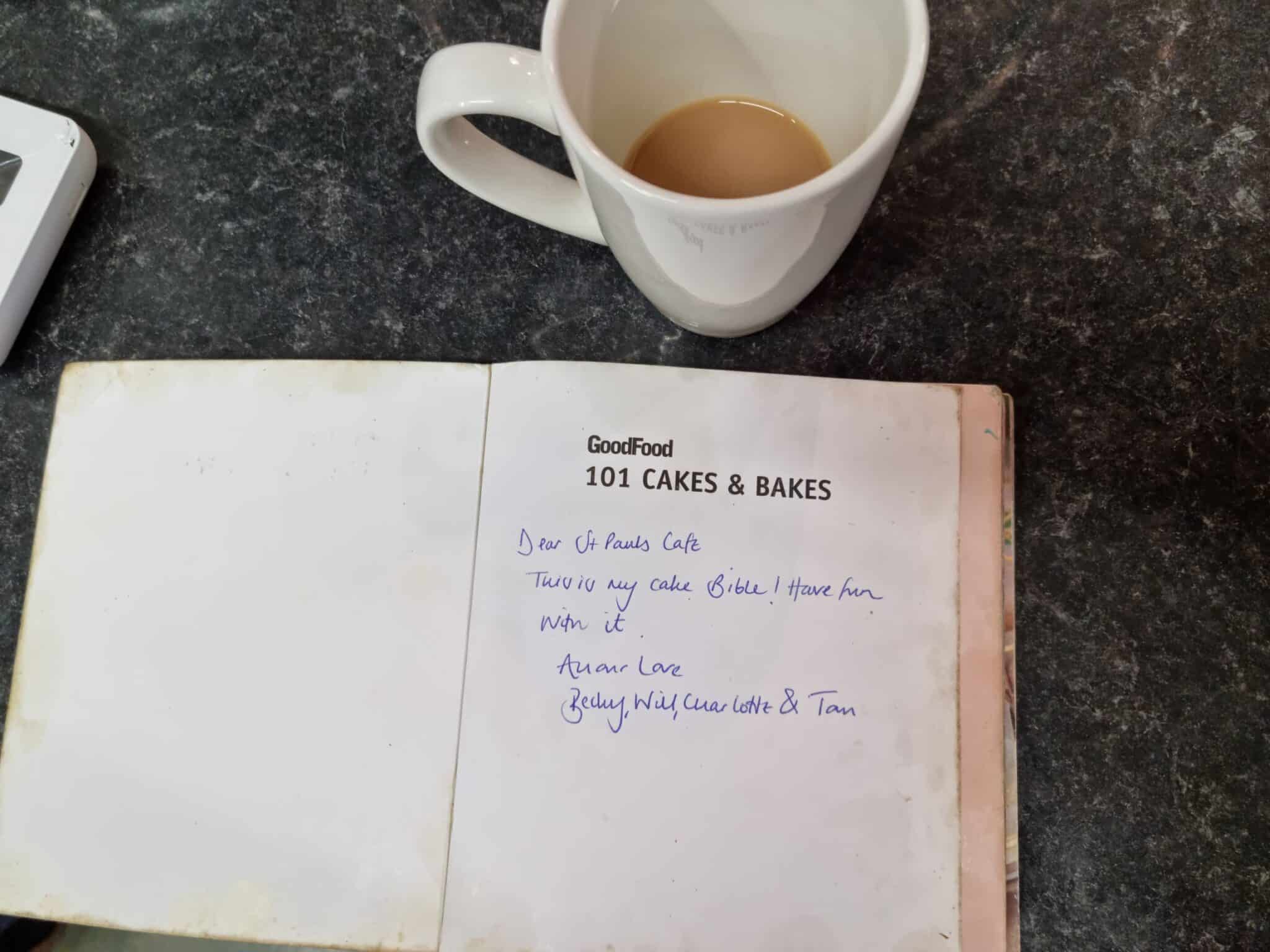 When Chris started in the café, she didn’t bake cakes. That was done by a woman in the congregation. When she left St Paul’s she gave Chris this recipe book, and wrote the message. Chris is still using this ‘cake bible’ all these years later. Will she pass it onto anybody else? 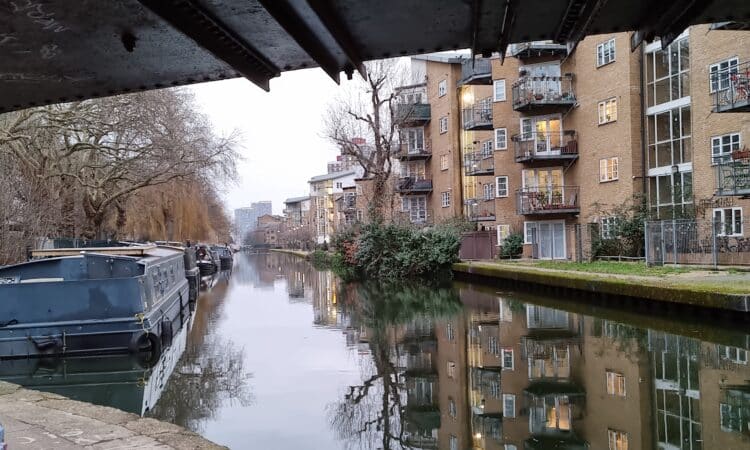 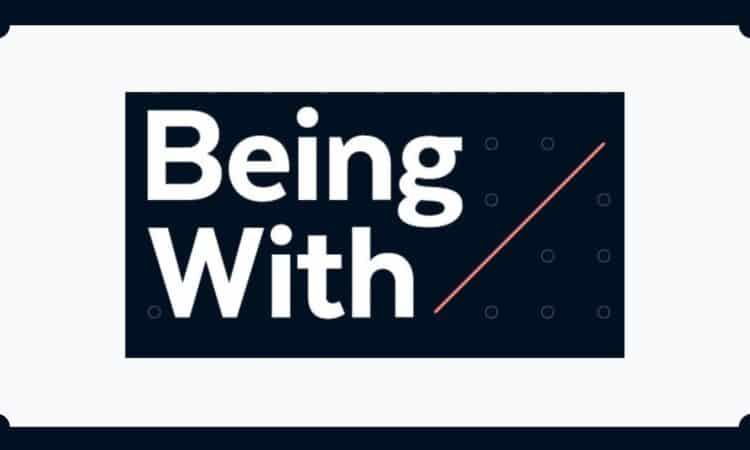 Being With: a new course about the Christian faith 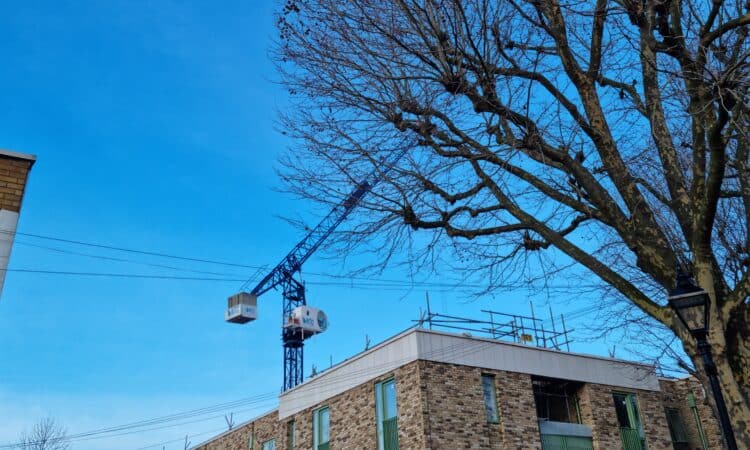